The pacing of metroidvania games

Metroidvania games are best known for their exploration. They often have large and very complex semi-open worlds. Exploring and figuring out how to traverse this world is what makes these games so fun to play. But as a designer, piecing this world together can be really tricky. If the pacing is not right players might lose interest in further exploring your world. In this blog I have summarised what I have learned from creating a metroidvania game.

The pacing of a metroidvania game is controlled by asimple mechanic: locks and keys. Players often encounter areas that are locked. To continue they first need to take a side path that will give them the required key. Locks and keys can be anything. It can literally be a door that is locked by a key. It can also be a enemy you cannot defeat without a higher level weapon or a  gap you cannot cross without the long jump skill.

In a game with an open or semi-open world you can have multiple levels of exploration. On every level of exploration you can find locks and keys.

World exploration is the broadest type of exploration. The game world is divided into a number of levels or scenes. These scenes are often locked at first. The players need to complete a task before they are allowed to continue, like defeating a boss or unlocking an upgrade.

Levels are divided in to a number of rooms. Players need to explore all of them to find the key rooms. There can be level specific mechanics that need to be unlocked before the player can travel through the entire level.

This is the most granular level of exploration. Sometimes rooms can contain a small puzzle or secret that requires a special move or a hidden lever to open up.

In this blog I want to focus only on the broadest type of exploration, world exploration. This type will have the most influence on the pacing of the game. 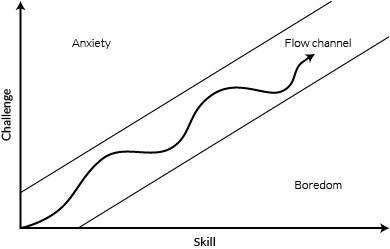 In case of exploration in a metroidvania game, one way to describe this difficulty is by how many available directions a player has to choose from. In the tutorial levels you don't want to overwhelm your player with a lot of branching paths. It is hard to make choices when you do not know how the world works. When the player learned to use all of the games mechanics you can offer them more challenging exploration puzzles.

Super Metroid is a great example of how to guide the player at the beginning of the game. Take a look at this chart with all the areas in the game. The player starts at a tutorial level in the Ceres Space Colony. After that the player has only one route. It is a linear path that goes all the way down to Norfair. This way the player has seen almost all of the levels before they are going to do some more difficult exploration.

As your environment becomes bigger and more open, players will need to be more skilled to still be in the flow. There is a simple trick you can do to make sure a player is skilled enough to go to a next area. Lock them in. Put them in a room where they cannot leave without knowing how to use a specific mechanic. This will force them to learn this mechanic on their own. You are lowering the amount of options the players have until their skill level is high enough to continue. Super Metroid does this in Brinstar. The level is seperated by a large elevator shaft. After the player went down this shaft it needs to do some puzzles before they can go back to the rest of the world.

The other big aspect of improving the pacing of your game is the way you reward your players. In the case of metroidvania games the most important type of rewards are the keys. Keys reward the player with new areas they can explore. It is important that these rewards are evenly spread along the game. When the player does not receive any reward for a long time they might get frustrated.

All areas should be meaningful

To make sure that every area feels rewarding they should all be meaningful. Make sure that exploring this area either processes your story or unlocks new mechanics. This rule should also count for every time you will be able to revisit an area. If an area has no meaning in the current state of the game you should consider either locking the area of or offer the player a shortcut to bypass the area. This way the player will keep being rewarded for exploring the world.

Backtracking is a very common thing in metroidvania games. As mentioned above backtracking through an area should always feel meaningful to the player. A great way to do this is by foreshadowing. You give the player a hint of something that may be important later in the game. Basically you are showing players the lock before you give them the key. The lock should be very memorable so that once players earn the key they go straight back to explore what they have unlocked.

A great example of foreshadowing in Super Metroid are the golden statues. They are in a room in Crateria. Every time the player has defeated one of the bosses the corresponding statue will turn grey. During the game the player will pass this room multiple times The room itself is hard to miss so it is very likely that the player understands to come back to these statues after defeating the final boss of the game.

If you want to improve the pacing of your game, think about all of the locks and keys at the broadest level of your world. Make sure they are evenly spread throughout the environment and make sure not to overwhelm your player with too many directions at the beginning of your game.

This blog post was part of the pacing chart tool I created. You can check the Super Metroid graph in the tool by downloading its file below.